You are here: Home / Crime / Courts / Governor to approve big salary hikes for himself, other top officials 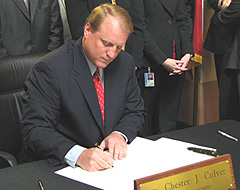 Salaries for the lieutenant governor, ag secretary, auditor, treasurer and secretary of state will grow by nearly 24 percent. The attorney general and supreme court justices will see their pay grow by 11 percent and the chief justice gets a 12 percent salary boost.

"Clearly the legislature wanted to try to address both executive branch and judicial branch salaries," Culver says. "It’s a lot of money and it’s about half of what the last administration received in terms of my increase — nine versus about 18 percent."

Effective July 1st, Culver’s salary will grow to by over $12,000. Senate Democratic Leader Mike Gronstal says it’s appropriate to raise the pay of state government’s top officials so they’re not paid significantly less than the people they’re managing. "For too long around this place what we pay state elected officials has been a political game and we thought it was a mistake to do that," Gronstal says.

The proposal seeks to tie future pay increases for these top statehouse politicians and judges to the salary schedules for high-level state government managers, like department directors. "Over time when we have years when our economy is weak those pay ranges will not change and when we have years when it’s appropriate and the economy’s O.K. those will go up over time and we will quit paying political football with the salaries of statewide elected officials," Gronstal says.

Culver says that rationale makes sense. "That’s what the legislature and leadership in particular (were) trying to address and I think they’re pleased with the step that they think it will take in terms of leveling that out," Culver says. "I’m also glad it was a bipartisan agreement. You have a number of Republican statewide elected officials that are also going to get an increase in their salary."