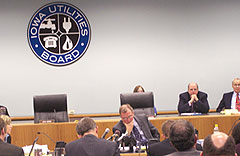 The Iowa Utilities Board today approved the request of Alliant Energy to build a new coal-fired electric plant in Marshalltown after nearly three hours of discussion.

The board voted two-to-one in favor of the plant for its Interstate Power and Light Company subsidiary, with the requirements that the company burn more renewable fuel overall, store carbon from emissions, and build new wind power.

Boardmembers discussed whether it was better to move ahead and build now, or wait to see how carbon emission and other environmental regulations changed. Boardmember Darrell Hanson cast the vote against the plant.

Hanson says he thinks the consequences of being wrong are greatest if they build the plant, as they can’t go back. Hanson says there are some alternatives to meeting an increased need for electricity in the short run, although he admits they are not ideal.

Board chair John Norris said he would only vote for the plant with the conditions that the company increased its use of alternative fuels. Norris says making the company use a greater amount of renewable energy will reduce the consumer burden of paying for carbon costs in the future, and he says the provisions would eventually require the company to get 25% of its energy from renewable sources.

Norris says it’s a tough balancing act in knowing that coal power is needed, but also promoting other sources of energy. He says the problem with wind, is that it is an intermittent resource, so having a baseload capacity of (coal plant) electricity helps enable the use of wind, but he says does having that baseload reduce the demand for wind. Norris says he tried to continue to create the demand for wind energy, while also keeping the base of electricity that makes wind more feasible.

I-P-L president, Tom Aller, talked with reporters after the decision. Aller says they are “very, very pleased” the decision has been made. Aller was asked if the provisions the board put on the plant will be acceptable to the company. Aller says the answer is “I don’t know” as he says they have to talk about what some of the percentages and figures mean, so it is premature to say if they will accept or reject the conditions.

Aller says they need to look over the figures carefully to determine its overall impact. Aller says it’s a matter of understanding what the conditions mean, what the criteria are and how they affect future rates. The proposal to build the plant was opposed by Iowa Consumer Advocate John Perkins who said the plant wasn’t needed and that Alliant should wait until new technologies were developed to burn cleaner fuels.

Environmental groups also opposed the plant and Nathanial Baer of the Iowa Environmental Council was on hand for the meeting. “We’re disappointed…we think there was a very good discussion and the potential was there for them to deny or delay the plant, and unfortunately they chose to approve it,” Baer says,”we’ll have to give some careful consideration to the conditions that they have asked Alliant to meet. Alliant hopes to have the plant in service by 2013. The plant is estimated to cost between 1.5 and 1.8 billion dollars.