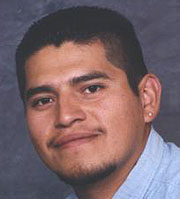 Des Moines police say a would-be robber was shot to death by the owner of a tavern early this morning, and a second robber was seriously injured. Police Sergeant Vince Valdez says officers were called to El Zacatecas Club before three A.M. where a brawl was underway outside a video store next door.

Valdez says: "When the officers arrived they found two men down on the ground struggling in the parking lot of the video store. Both were injured." He says officers had to determine who was who in the situation very quickly.

Valdez says the bar’s owner, Martin Ramirez, was holding down the second man, claiming that man had tried to rob him along with another man who was still in the bar. Officers went inside and found a badly wounded man who had been shot. He was rushed to the hospital where he was pronounced dead. He’s identified as 32-year-old Nicomedes Vazquez of Des Moines.

The man with whom Ramirez was fighting in the parking lot is identified as 24-year-old Angel Nungaray of Indianola. He was listed in serious condition. It’s unclear if Nungaray had also been shot. Ramirez was treated for his injuries and released. As yet, no charges have been filed.