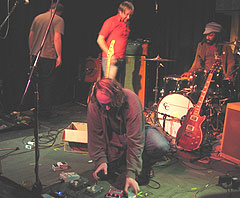 The five men are members of the rock band Neva Dinova. The quintet played in Des Moines this week, one of their stops on a tour that includes 36 shows in 26 states. Jake Bellows is the group’s lead singer and guitarist.

"It takes us 130 dollars to fill up our tank, then we can drive for five hours on 130 dollars. Most of our drives are probably like eight hours, so we’re spending about 175 dollars each day on gasoline," Bellows said prior to the band’s Tuesday night performance at the Vaudeville Mews. Bellows says the band’s goal is to make at least $200 a night. For a relatively unknown band, like Neva Dinova, it can be tough to draw a big enough crowd to make that kind of money…especially on a Tuesday night in Iowa.

Bellows says he and the other band members all have regular jobs and tried to save up for the cost of gas. "It’s prohibitive…we basically have to save up money from our jobs so we can afford to get around," Bellows said. It’s been said by many touring musicians, "if you’re not playing, you’re paying." Bellows says that’s why his band prefers to play somewhere every night. Neva Dinova was without a show on Monday night.

"We tried finding a show in the Quad Cities. We walked into a bar with some gear and there was a bartender and one drunk guy laying on the counter. I was like, nevermind," Bellow said, deciding the band might be better off just heading to Des Moines. On most nights, the five Nebraskans don’t make enough money to afford a hotel room.

Bellows says they try to make friends at each show and hope they’ll offer "a floor to sleep on." Neva Dinova’s third album, titled "You May Already Be Dreaming," was recently released by Omaha based Saddle Creek Records.