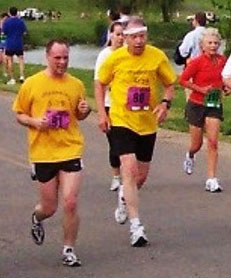 A week ago, Senator Charles Grassley ran a three-mile race in Washington, D.C. and finished in just under half an hour. Grassley, though, isn’t crowing about the achievement.

"You know, after nine years of doing (that race) I should do better than the first year and I’m not doing better because my first year was 27 minutes (and) 20 seconds," Grassley says, "and now this one was 29 minutes and 29 seconds."

Grassley, who is 74 years old, finished first in the Capitol Challenge 70-and-over age division. Grassley ran the three-mile course with a faster time than in 2007.  "By about half a minute, so I’m not as bad as I was last year," Grassley says. "If I had a little more discipline and coaching I could probably do a lot better but I tend to do it myself and I need to be a lot more professional as I approach it."

When Grassley turned 65 in September of 1998 he was chairman of the Senate Select Committee on Aging and he had an epiphany. "I was invited to every nursing home in the state of Iowa. I didn’t get to all of them, but I was impressed with what they were trying to do to get people to be physically in the nursing home, kicking a big ball from their wheelchair or maybe wiggling their fingers," Grassley says. "I thought to myself: ‘Ye gods, I don’t want to be in that position when I get older. I want to be more physically active.’"

So Grassley made a New Year’s Resolution to start running. "I was fortunate enough to have a staff person…Scott Stanzel, who’s now assistant press secretary for the White House and he said, ‘Well, I’ll coach you,’ so he coached us for maybe three or four months and have been running regularly since," Grassley says.

Grassley ran two miles at least four days a week ’til he was 70, but then started running three mile routes. That means at age 74, Grassley is running between 12 and 15 miles a week. Grassley starts his run these days at 5:15 a.m. When he was running just two mile routes, he began a tiny bit later.  "I wanted to make sure that my staff that came to run with me…that they were always there for starting out at 5:30 so I said, ‘Be there by 5:29’ so we called it the 5:29 Club," Grassley says. "We have shirts that say ‘Grassley 5:29’" and stuff like that."

Grassley, who won his current six-year term in the U.S. Senate in 2004, ran an ad in that race which featured video of Grassley running up some steps. He’ll be up for reelection in 2010.