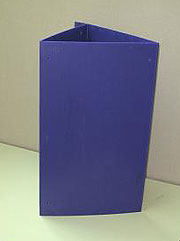 A highly destructive insect called the emerald ash borer has invaded several Midwestern states and Iowa officials are setting hundreds of unusual traps to see if they’ve arrived here yet.

Rob Meinders, state plant health director at the U.S.D.A., says the large purple-colored prisms are being hung in trees in about a dozen eastern and southeastern Iowa counties this week.

Meinders says the triangular-shaped traps are made of corrugated plastic and measure about a foot and a half by two feet. They’re being hung in the trees with a sign at the base of the trees, explaining what they are and with an 800-number to call for more information. He says about 1,200 of the traps will be placed in Iowa trees between now and Memorial Day. Meinders says they’ve proven very effective in luring the bugs.

Meinders says the traps are very sticky and the color purple attracts the beetles, in addition to manuka oil, which smells like an injured ash tree. The emerald ash borers were first found in Michigan in 2000 and are already infesting trees in states including: Ohio, Indiana, Pennsylvania, West Virginia and Maryland.

They’ve also been found in Illinois, within about 80 miles of the Iowa border. He says it’s hoped the borers are not found in Iowa as they’re a difficult creature to fight, though it’s likely just a matter of time before they reach the state. He says there are some treatments but those aren’t recommended right now, at least until the bugs are confirmed to be within a county or two.