You are here: Home / Fires/Accidents/Disasters / Firefighters warn of lighters that look like guns, toys 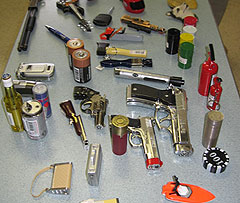 Firefighters in Iowa are issuing a warning to parents about cigarette lighters that look like toys. Joel Westendorf is a firefighter in Altoona.

Westendorf says young children have burned themselves thinking they’re playing with a toy. The lighters can also be dangerous for adults. Two years ago, a woman from South Carolina was injured because she owned a lighter that resembled a handgun.

Westendorf says the woman thought she was picking up the lighter, but it was an actual handgun. She shot herself in the hand. Westendorf bought a similar handgun lighter at a convenience store. “I actually have a firearm about the same size as that, so I can see how it can get mixed up,” Westendorf said. Another novelty lighter Westendorf owns looks exactly like a car key.

“If you put that on your key ring…I know a lot of people hand their car keys to their children in a grocery cart while they’re pushing them around the store,” Westendorf said. “What’s to stop them from lighting the lighter?” Westendorf has been working with state Senator Dennis Black from Grinnell to pass legislation banning novelty lighters in Iowa.

Westendorf says the states of Maine and Tennessee have recently approved laws banning novelty lighters. He’s hoping Iowa will eventually do so too.