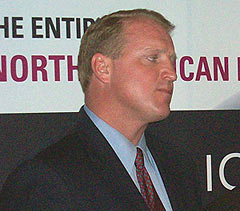 Iowa’s 42-year-old chief executive is ranked near the top of a list of the nation’s "sexiest" governors. The ranking was done a panel of strippers, organized by Playboy Radio.

The strippers were asked which U.S. governors were most "doable" — a conversation sparked by former New York Governor Eliot Spitzer’s resignation after Spitzer admitted he’d paid to have sex with a prostitute.

The list includes both current governors as well as those who have recently left office. The strippers ranked Arnold Schwarzenegger as the governor they’d most like to have sex with and they ranked Spitzer number 18. Former Florida Governor Jeb Bush — the president’s brother — was ranked in the number two spot. Michigan Governor Jennifer Granholm was number three and Iowa’s Chet Culver was number four on the list.