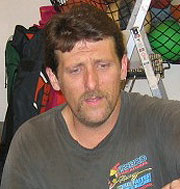 Another traffic crash in the state has claimed the life of a motorcyclist. The crash last night in Des Moines is the 11th motorcycle related fatality this year in Iowa.

Sixty-one motorcyclists were killed on Iowa roads in 2007. Last night’s incident was reported around 9 p.m. at a busy intersection on Des Moines’ south side.

Police say a motorcycle driven by 41-year-old Randal Campfield of Bondurant was struck by a car driven by 26-year-old Eugenia Mota of Des Moines. Campfield, who was not wearing a helmet, died in route to the hospital from apparent head injuries. Police are still investigating the crash and have not filed any charges.