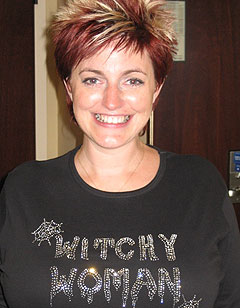 An internationally known clairvoyant and medium makes her first stop in the Hawkeye State today. Lisa Williams is in her second year of hosting the TV show "Life Among The Dead" on the Lifetime network.

Williams says, "I have the ability where I can communicate with those who are no longer with us." She says the spirits call out to her, saying they need to talk with their wife, husband, daughter, whoever was close to them, in order to bring closure and healing.

"Really, I’m just passing on messages for those who are no longer here, just to say, ‘By the way, I’m okay,’ or ‘This is what actually happened,’ or ‘The will is hidden or the secret money is hidden in the garage on the back shelf on the left hand side.’ Who knows what will come through?," Williams says.

Since she was a girl, Williams says she’s had the ability to see and speak with spirits. "I was four years old when I started to really sense things. I thought everybody saw dead people and I thought it was normal. It was only when I was much older in life, maybe a teenager, I thought, ‘This is really strange,’" Williams says.

The British-born Williams says the skills are generational, as both her grandmother and her aunt were mediums. Williams says her eight-year-old son also has the gift. She considers her abilities a blessing.

"I tend to communicate through voices," Williams says. "They speak to me. I also see them. I also feel them, so when they’re telling me things, I also feel what they went through as well. I can often relay so many messages across, just by using all my senses." She says her father is among her biggest skeptics and that he’s still "on the fence" about her abilities.

Williams says she tries to provide very specific details for people, names, dates, whatever, to prove her authenticity. Tonight, she’ll be in Des Moines to, in her words, relay messages to the living from the dead. For more information, visit the Civic Center of Greater Des Moines at "www.civiccenter.org" or Lisa Williams’ website at www.lisawilliamsmedium.com .