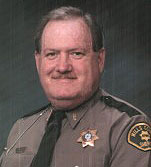 Taylor says investigators have been watching Grosvernor’s alleged activities for quite some time. He says a deputy uncovered "a little bit extra evidence" within the past couple days that allowed the department to apply for a search warrant. Taylor says law enforcement officers from 19 jurisdictions are participating in the search of the property.

The agencies include the Iowa State Patrol, the Iowa DCI, a narcotics task force and a variety of sheriff’s departments. Taylor says the evidence includes a skid loader, a car, a pickup, power washers, a large air compressor, tool boxes, and even bathroom sinks. Two flatbed trailer loads of goods were removed from the property on Tuesday.

"For a residential search warrant, this is without a doubt the largest cache of seized property I think I’ve ever seen," Taylor said. Grosvenor was not at home when the raid was conducted. The sheriff says because Grosvenor is not believed to be a threat or a flight risk, authorities are in no hurry to arrest him. They’re looking into the possibility that others may have helped Grosvenor acquire the stolen goods.

"Once we get Grosvenor in custody, we will continue to investigate and try to see exactly how far this whole process mushroomed out," Taylor said. Individuals who want to see if their stolen property was recovered in the raid can call the Mills County Sheriff’s Office at 712-527-4871.