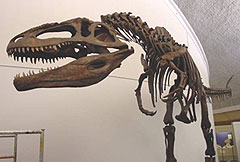 Iowa kids who love dinosaurs are the first anywhere to see a new fossil exhibit that’s making its world premiere this holiday weekend at the Science Center of Iowa. Spokeswoman Sally Dix says the exhibit, called

"The Humongous Among Us: The World’s Biggest Dinosaurs," features a replica of one of the largest carnivores, called the Giganotosaurus. It stands 42 feet tall.

Dix says a fossil of the huge creature was discovered about ten years ago by a car mechanic on a dune buggy in Patagonia. It’s one of the newer dinosaurs and is the world’s largest, nearly-complete meat-eater. Many people think the T-Rex is the biggest, baddest dinosaur ever, but she says the Giganotosaurus has it beat.

While the science center in Des Moines has had other dinosaur exhibits in the past, Dix says this one is different as it’s a fossil exhibit, plus, it’s focused on the science of paleontology and what it takes to go out in the field and make a discovery.

It’s set up so people can "become the scientist" by digging for fossils themselves and by seeing the tools the real scientists use as they search for the signs of these thunder lizards from hundreds of millions of years ago. This is the first time the exhibit has been seen anywhere and Dix says it’s a real thrill to have the show’s world premiere in Iowa.

"The way that we’re putting it together is unique with some of the theming and it’s going to be really special because of the programs that our team has put together to go along with the exhibit," Dix says. "(There are) all kinds of different activities, from a backpack through time to dinosaur myths, discovering dinosaur anatomy and behavior, we’ve got all kinds of hands-on activities that are going to complement this fossil exhibit."

There’s also an I-MAX film called, "Dinosaurs: Giants of Patagonia." The exhibit opened Saturday and will be in Des Moines through mid-August. The Science Center is open today, for more details, visit the center’s website .