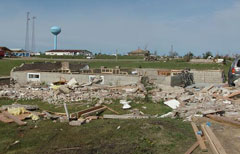 A man who has lived in Parkersburg since 1968, lost everything but his family in the tornado that swept through Sunday.

Dennis Schipper went to the basement with his wife after hearing the warning on the weather radio. Schipper says it was raining, and then it was very quiet before the tornado hit.

Schipper says: “If you know what it sounds like when you snap a two-by-four off, when wood snaps, that’s all you heard, just crack, crack, crack. Insulation was falling on top of us, we didn’t have no wood or anything hit us. And my wife says ‘we’re gone.’ She was hanging on to me.” Schipper says things quickly ended.

“And then all of a sudden, bumps and it was gone, and I looked up, I could see the sky and I knew it was bad,” Schipper says, “so I got through the rubble and got my head above here and I looked around, and I could not believe it. Everything was gone” Schipper says he hollered down to his wife and told her the house and the vehicle were all gone. Schipper says the massive destruction happened quickly.

He says the actual tornado, and his son agreed, lasted only 30 seconds to a minute. Schipper says not only did he lose his house, his daughter and son both lost their house. Schipper’s son and wife were trapped in the basement before being rescued by a deputy. As Schipper looked out across the damage, he pointed to a basement across the way where his van now sits. Six people died in the tornadoes, four in Parkersburg and two in New Hartford.