You are here: Home / Military / State Veterans cemetery will be dedicated in July 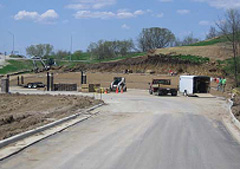 State officials had hoped to be celebrating the opening of the new state veterans cemetery on this Memorial Day, but cemetery director Steve Young says that’s now been delayed by about one month.

Young says they had a tough fall with rains and a tough winter and spring, so while they hoped to dedicate the cemetery today, they’ve moved it to July 3rd at 1pm.

The state broke ground for the cemetery on Veterans Day in November of 2006 on the 100-acre site on the south side of Interstate 80 near the Van Meter exit. Young says the roadways are completed and they’re putting the final touches on the grounds.

Young says they’re finishing up the outside landscaping, shaping the property for sod laying and seeding, and finishing up the administration building and maintenance complex. Young says the facility will be ready for use shortly after the dedication. He says after the Thursday dedication, they’ll begin internments on the following Monday, and already have the remains of 60 people waiting.

Young says they’ve already had 900 people apply to determine if they’re eleigible for internment in the cemetery. Young says the initial cemetery area will serve veterans for a couple of decades.

The total capacity of the 100 acres now is 80,000 burials, with the first phase having a capacity of 24,000 burials and the cemetery is projected to be available for 20 years. Iowa veterans and their spouse can be buried in the cemetery. To find out more, visit the Iowa Department of Veterans Affairs website.