You are here: Home / Education / State officials may try something special for damaged APB High School 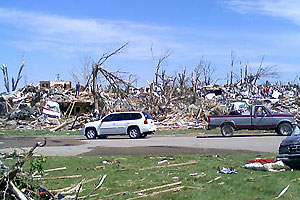 The Aplington-Parkersburg High School appears to be a total loss and efforts to collect memorabilia from inside the building have been abandoned due to concerns the heavily-damaged structure might collapse.

“We understand the pain and the loss with that high school and so we’re going to work together with the local officials and look at some options,” Culver says. “We don’t know precisely at this time what they are.” Temporary arrangements are almost certain for the academic year which begins in the fall.

“It’s possible the legislature might be able to do something to help next session if we were able to something a little different and unique given the severity of the tornado there,” Culver says. The high school was built in the 1970s in Parkersburg.

In 1992, Parkersburg began sharing classes and activities with neighboring Aplington, then in 2004 the two districts officially merged into one. The Aplington-Parkersburg middle school building in Aplington has been serving as a temporary shelter to Parkersburg residents who lost their homes in Sunday’s tornado.