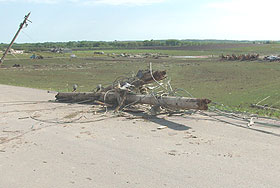 Oficials involved in the cleanup of tornado damage in northern Iowa have issued a call for volunteers to help farmers in Butler County.

Patrick Derdzinski of Butler County Extension says farm fields are full of things that were never meant to be there.

“The amount of debris is unbelievable. I have never seen anything like that,” Derdzinski says. “There is debris scattered across about a two-mile-width area where the storm went through and it is just everywhere.”

While much of the attention after Sunday’s tornado has been focused on the devastation in the town of Parkersburg, Derdzinski says nearby farm fields illustrate the force of the tornado as they’re littered with debris.”Everything from just everyday trash…plastic and paper to telephone poles and utility lines that were snapped off and tossed 100, 200 yards, big trees that were laying out in the middle of fields. We saw insulation from homes,” Derdzinski says. “We saw two-by-fours from the roofs, from trusses of homes tossed all over fields, embedded in the banks of the road, embedded in trees.”

According to Derdzinski, farmers have a two-to-three week window to get that debris out of the field so they can get back to work and try to grow a crop. That’s why they’re asking for volunteers to step up and help farmers get their fields back in shape.

Volunteers will see some weird things in those farm fields, according to Derdinski. For example, he saw mud embedded in wood as he walked through some of the Butler County countryside. “The mud had to have been thrown at such a force. It’s actually not just caked on, it’s actually embedded in wood posts and things,” Derdzinski says. “…We saw a car that was rolled up into a ball, out in the middle of a field, in the middle of a section, far from anything else. How it got there, it’s just hard to imagine.”