You are here: Home / Agriculture / Iowa Corn Promotions Board asks for increase in corn checkoff 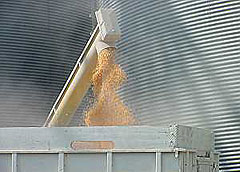 The organization that promotes one of Iowa’s top crops is asking for a raise. The Iowa Corn Promotions Board will hold a referendum on July 8th asking producers to increase the checkoff they pay on each bushel of corn by one-quarter cent.

The chair of the Iowa Corn Promotions Board, Julius Schaaf, says the current checkoff is one-half cent on each bushel.

"We feel that with the challenges facing the corn industry now about our use of corn for ethanol, and the various uses we’ve developed coming under attack, we feel we are coming under attack, we that it’s time that we need additional funds to continue getting corn’s message out there and tell our side of the story," Schaaf says. He says they also want to continue the efforts to improve corn production.

He says they have some nitrogen research that has "come quite a ways now" and they want to keep doing the research and continue "the good work that we’ve done in the past."  Producers can request a refund of the checkoff funds if they don’t want to participate.

Some critics have blamed the use of corn in ethanol production for the increase in the cost of food, while others express environmental concerns over ethanol production. The Corn Promotions Board and others have disputed those criticisms. Schaaf says they need to continue fighting such claims.

"I don’t think there’s a producer out there that doesn’t know that corn’s under attack right now…especially for our ethanol demand that we’ve developed," Schaaf says, "this is a great chance for energy independence in the U.S. …and to bring funds back to the midwest. We can’t let the distracters win on this issue, we’ve got to stay out in front of this."

Schaaf says the promotions board’s cost go up just like everyone else’s and there comes a time when you have to keep up the times in funding. Any producer who raised and marketed at least 250 bushels of corn during 2006-07 is eligible to vote at any county extension office in the crop reporting district where they live. Schaaf says roughly 50-thousand corn growers would be eligible to vote on the increase.

Producers may call 515-281-5321 or e-mail: [email protected] or visit the Iowa Ag Department office in Des Moines to request an absentee ballot request form for the checkoff vote.