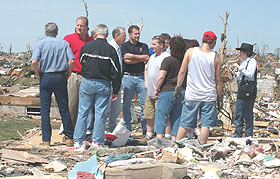 Iowa’s five congressmen today co-sponsored a resolution in the U.S. House expressing sympathy and support for the victims of the deadly tornado that hit Butler, Black Hawk, Buchanan, and Delaware counties May 25th. First District Congressman Bruce Braley , a Democrat from Waterloo, also planned to request a moment of silence on the House floor in honor of the eight people who died as a result of the tornado. (Braley is 5th from left in above photo)

Braley represents part of the damaged area and says one of the big issues now is managing all the donations to the victims. Braley says for example, donations of clothing have poured in for those who lost everything in Parkersburg. Braley says there may be specific individuals where the clothing donated does not meet their specific needs. He says that’s why they want to be sure that the insurance adjusters get in and start adjusting the claims so people can get reimbursement to replace clothing and other consumer goods ruined in the tornado.

Braley says all the donations are very welcome, and he hopes the effort to help the storm victims will continue. He says they want to make sure that the volunteers continue to come after the publicity dies down, as he says the need for volunteers will still be there long after the rest of the country goes about their business. Braley encourages people who can help storm victims to contact officials in any of the counties that were hit to see if they need volunteers.

“One of the things that I know is that sometimes the communities that were affected feel somewhat left out,” Braley says, “in Lamont (in Buchanan County) they had a horrible flooding problem. Twelve inches of rain in five days, and their whole town is full of corn stalks that are going to take a lot of manual labor to remove.”