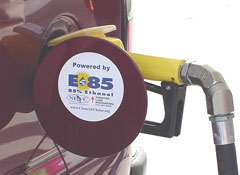 A new report finds Iowa motorists who own flex-fuel vehicles are buying a lot more of the corn-based fuel that’s 85-percent ethanol.

While May and June numbers aren’t yet available, the April numbers for E-85 are zooming past those from a year ago, according to Jessica Zopf, manager of the Clean Air Choice program of the American Lung Association of Iowa.

Zopf says if you compare that one month’s sales to the entire second quarter of 2007, they’re at least at the halfway point of 450-thousand gallons and that’s only with half of the retailers reporting. Between April, May and June of last year, some 800-thousand gallons of E-85 were sold. Currently, 81 stations in Iowa are offering the blend of fuel. She says E-85 sales are headed for unprecedented levels and she offers the credit to several things.

Zopf says more people are buying E-85 because it’s cheaper than regular gasoline, in addition to the benefits to the state economy and to air quality. During April this year, she says the average statewide prices for E-85 were 81-cents a gallon cheaper than for regular unleaded gas. So why is the Iowa chapter of the American Lung Association keeping such close tabs on ethanol? She says the reasons are simple.

She says biofuels are "cleaner-burning and better for the environment, you get less greenhouse gas emissions, you get overall better air quality for Iowans to breathe." Zopf says her group estimates that the E-85 sold during the one month in Iowa helped prevent more than 18-hundred tons of lifecycle carbon-dioxide from entering the air. For more information, visit the Clean Air Choice program website .