You are here: Home / Fires/Accidents/Disasters / Mason City water plant could be up and running again soon 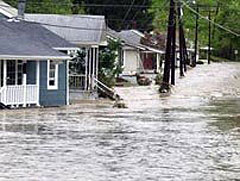 Officials hope Mason City’s water plant will be running again soon, after floodwaters inundated the facility during this weekend’s historic heavy rain. Water levels on the Winnebago River have broken records not just since 1993, but dating back to the 1930s.

Mason City’s city engineer Mark Rahm says the rivers and streams are starting to recede now and giant pumps are draining out the floodwater from the city water plant. Rahm says they’ll be pumping out the plant’s basement soon and as soon as staff can get inside, they’ll assess the situation. Also, giant fans have been brought in to dry out the electronics and control systems.

Rahm says residents of Mason City are being told to use -no- water, meaning no flushing of toilets and no turning on taps. He says there is stored water but it’s unclear yet if it’ll be safe to use. He says tests are being performed on a five-million gallon underground storage tank and a huge clear well tank, and soon they’ll be able to see if their high-service pumps will work. No timeline has been set.

Mason City Police Chief Mike Lashbrook says he hopes the worst is behind them. The water is receding and many of the roads that were closed yesterday are open today. Chief Lashbrook urges people to stay away from flooded areas and not to touch barricades that are blocking roads.

As yet, no injuries are reported from the flooding in Mason City and Lashbrook says he’d like to keep it that way. It’s easy to get swept away in the floodwaters, he says, and "as fast as that water’s moving now, there’s not much we can do for you." Chief Lashbrook says the city remains under a state of emergency and residents are subject to a curfew.

He says the curfew was effective on Sunday night and it will continue at least for tonight, taking effect at 9 P.M. and running until 6 AM on Tuesday. Mason City Mayor Roger Bang thanked residents for their patience during this challenging time.

Mayor Bang says the water situation is being handled with all due diligence and he acknowledges "it’s a major, major concern for everybody." Shelters are set up in nearby Clear Lake. Anyone who stockpiled water prior to the shutoff is urged to boil it before it’s consumed or used in cooking. Mercy Medical Center/North Iowa in Mason City is on emergency status. Most surgical appointments have been canceled.