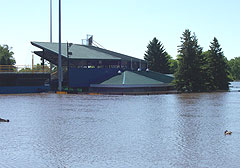 The city of Cedar Falls is now calling for mandatory evacuations of the downtown area due to the flooding Cedar River. Volunteers have been filling sandbags trying to build up the levee that’s holding out the floodwaters. Mayor Jon Crews says it’s believed the water could flow over the levee by tomorrow morning.

Crews says the last estimates he heard was the water would go over the levee early in the morning, two o’clock of five o’clock, and they are working to build the levee up a few more feet. The levee was built in 1999 and Crews says it will hold against the water, but can’t stop the water if it rises over the top.

Crews was walking along the levee this afternoon trying to get gawkers to move out of the way of the sandbagging efforts. “Unless you are down here for a reason, please don’t come down to the river. It’s not a sightseeing thing to be here today,” Crews says. Crews says there are sand trucks moving around and he is asking people to leave if they aren’t helping out.

Crews says some pumping stations have gone out as they were flooded. “Use as little water as possible today, I’m not saying you can’t use water, very cautiously, the less water use the better,” Crews says. He says if you use too much water the rest of the sewer system could get overtaxed and sewage could back up into basements. Officials have begun evacuations in the nearby city of Waterloo, as the levees there are breaking.

State officials today said the Cedar River Valley is one of biggest concerns today. Lieutenant Governor Patti Judge talked about the flooding problems in a news conference with reporters. “This is becoming a very challenging, very serious situation for the entire state, particularly the eastern half and here in the Des Moines River basin,” Judge says. Judge asks all residents to be prepared for rapidly changing situations.

Judge says: “I want to be certain that the people of Iowa understand that this is a serious situation — that they should be prepared if they live in one of these river basins, and particularly in low lying areas, that they need to stay tuned closely to the media and be ready to evacuate if they are asked to do that.”

Miller says there are attempts to compare this to 1993, and while the impacts of this flooding may not be the same as 1993, the severity of the waters with record or near record crests that are gonna happen means severe flooding in several areas. He says we will continue to see flooding throughout this week and perhaps into next week. The Army Corps of Engineers has doubled the outflow of water at the Saylorville Reservoir, as the floodwaters are expected to go over the emergency spillway early Wednesday.

In nearby Waverly, the Cedar River has swamped the town. Donita Dettmer lives in a home on a hill at the outer edge of Waverly. “We’re fairly lucky,” she says, adding every place around her seems flooded. “Most of Highway 218 has water running over the interstate where there has never been water before.”

Dettmer’s home is normally two miles away from the river, but the water is creeping ever closer. “Places where in the flood of ’99 the water came up are now totally completely under water and the water is much higher than it ever was before,” she says.

Waverly was filled with people who lost their own homes during the May 25th tornado that tore through nearby Parkersburg and New Hartford. “They are in hotels or motels because they have no place else to go…It’s a major part of our town that’s under water,” she says. “There are not a lot of places left for people to go.” Dettmer is the sister of Radio Iowa reporter Dar Danielson.

The Cedar has flooded from Waverly down through Janesville and into Cedar Falls.

Elwin Huffman of KOEL contributed to this report.