You are here: Home / Fires/Accidents/Disasters / Cedar Falls calls for volunteers again for sandbagging 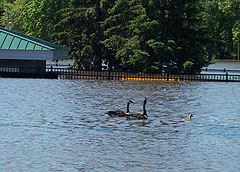 So far, so good, as the two-mile-long volunteer-built sandbag wall is holding back the floodwaters from washing over downtown Cedar Falls. The Cedar River there is six feet higher than ever before. Officials are urgently calling for more volunteers to help reinforce the wall, as it’s under extreme pressure, staving off a record-high level of water. Cedar Falls’ spokeswoman,Susan Stout, says they’re safe, for now, but the forecast for more rain showers is not promising.

Stout says: "The volunteers last night saved us, I can’t emphasize that enough. We are still in a critical stage. The river crested at 102.13 feet between 1 AM and 2 AM. These are historic record levels. The previous high level in 1999 was 96.20 feet." The sandbag wall is holding but it’s saturated. Stout says if more rain falls and the Cedar River rises again, they’ll need to work harder to keep back the torrent.

"We are expected to surpass these levels into Friday and of course, that’s depending on what the weather does to us for the next couple of days," she says. "While the volunteers saved us and we can’t thank them enough, we are still in a critical stage. We need volunteers today. The ground is saturated. The levee is saturated and we need to continue to have people help." Dozens of people spent the night in emergency shelters and they may be there for several more days.

Mary Dooley is spokeswoman for the Hawkeye Chapter of the American Red Cross, which has a pair of shelters open in Cedar Falls and another in Waverly. Dooley says the shelters have been open and are sheltering about 70 people in Waverly and close to 90 in Cedar Falls. As more evacuations are ordered, she expects more people to arrive at the shelters in Cedar Falls, both of which are at the University of Northern Iowa.

"There are meals and snacks available. We have capacity enough to handle all anticipated evacuees," she says. "We would urge people who need shelter to come to the West Gym on the UNI campus or to the McLeod Center on the UNI campus." Cedar Falls Mayor Jon Crews praises the hundreds of volunteers who helped to build the sandbag wall on Tuesday, some working ten-hour shifts. He says the downtown was saved, but other areas of the town weren’t so lucky.

Mayor Crews says: "Obviously we’ve got a lot of areas north of the river that aren’t saved. I mean, the flat area if you look across, a lot of people are in need of housing, and the Red Cross for food and shelter. It’s this side of the river that was saved. The levee was built and we were able to add to that with this topping of the sandbags." Perhaps a half-million sandbags were filled and placed along the river in Cedar Falls yesterday. The mayor says that make-shift wall is doing its job and he prays the forecast rains don’t fall.

"I think it’s held and we’ve gotta’ make sure that, as we’ve said, we’re trying to keep people out so we can continue to maintain it," Crews says. "We’ve got bags and we’ve got people here so, it should work. If the river goes up again, higher than it was, you could project something that would overtop now but it’s going back down and hopefully the weather will hold and we’re pretty confident it’s worked so far."