You are here: Home / Fires/Accidents/Disasters / Governor says 2008 flooding "absolutely" worse than in ’93 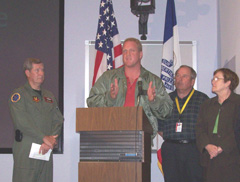 Iowa’s governor says the "scope and power" of the flooding that’s striking Iowa this year is "absolutely" worse than the historic floods of 1993. Governor Chet Culver says damage to infrastructure will be in the "hundreds of millions of dollars," including the damage or destruction of "dozens" of bridges.

"We have nine rivers right now across this state — not including the Missouri and the Mississippi — that are above record level or very close to record level. That’s all time records," Culver says.

By seven o’clock Wednesday night the governor had declared 54 of Iowa’s 99 counties disaster areas due to damage from the flooding and tornadoes, including a tornado which struck a Boy Scout camp in northwest Iowa tonight.

The head of the Federal Emergency Management Agency plans to visit Iowa Friday, a move Culver says bodes well in terms of lining up federal help for Iowans, including supplies of food and water in the short term. "I’m glad that the director is coming and I’ve been very aggressive in terms of my discussions with federal officials including the president and putting them on notice that we’re going to need rapid response and I’ve been given a commitment that we will, in fact, get one," Culver says. Culver, who talked by phone with President Bush Wednesday, will escort the FEMA director on an aerial tour of the state to view flood damage and surging rivers.

In Cedar Rapids, over 800 residents in were evacuated from their homes on Wednesay and state officials like Public Safety Commissioner Gene Meyer are urging Iowans to heed evacuation warnings, if they are issued. "Listen to your local law enforcement people — your police chief, your sheriff, your county emergency management coordinator. If they tell you that they need you to evacuate, they don’t make that decision lightly. They know how much you value your property, but we all your value your life and your public safety," Meyer says, "so what’s most important is if they tell you to leave, please do that."

By Wednesday afternoon, there were 640 Iowa National Guard soldiers on duty assignments around the state that ranged from security to sandbagging. Iowa National Guard Adjutant General Ron Dardis expects to have up to 17-hundred of his soldiers on storm-related duty in Iowa soon, including the two-hundred who were being sent to Cedar Rapids overnight to help evacuate residents. "This is an opportunity for us to….come to the aid of Iowans in a time of need," Dardis says.

Two Iowans have died this week in weather-related accidents. A car hydroplaned on a wet Hamilton County road on Monday, killing the driver. On Tuesday, a farmer died in a storm-related accident on his property in Wright County.

Culver says he and other state lawmakers will work in a "bipartisan way" to help the state recover and rebuild. "Even if it requires a special session that I might have to call given the magnitude of both the tornado in both Parkersburg and New Hartford and now the flooding that has affected 50 percent or more of our state by the time this is over," Culver said. If a special session doesn’t occur sometime later this year to pass a state storm relief package, that will be a priority in January, 2009, when the legislature convenes in regular session according to the governor.