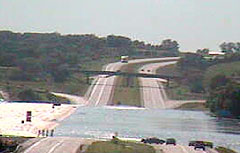 The Iowa River has crested in Iowa City and the Cedar River has dropped by over five feet from its "historic" flood level.

Governor Chet Culver says 36,000 Iowans have been forced from their homes due to the flooding of the past two weeks and more could be soon in other places in Iowa’s southeast quadrant.

"Burlington continues to be a real concern. What we’re anticipating are record crests on the Mississippi River south of New Boston so that means it’s likely we will see major and serious flooding on every part of the southeastern border of our state," Culver says.

"This is not just record flooding. This is far over record flooding," Miller says. "It is of historic proportions." According to Miller there’s no estimate, yet, of the amount of Iowa land which is or has been underwater, but he says it will be in the "millions of acres." The governor has declared 83 of Iowa’s 99 counties disaster areas and Culver uses the word "massive" to describe the breadth of the damage.

"We want to emphasize that while we are having challenges in our urban centers, we have multiple, ongoing battles in smaller communities and we’re doing just as much to help those rural, more remote areas of our state — like Columbus Junction, for example, and Fredonia — as we are in the metropolitan areas," Culver says. "The good news is we have the resources to fight on both fronts."

By midday Sunday there were 3300 Iowa National Guard troops deployed throughout the state to provide security and lead sandbagging efforts in other areas. By Monday, the adjutant general of the Iowa Guard expects to have 4000 Guard soldiers on active duty to fight the flood of 2008.

The state has established a new website that’ll be a clearinghouse for all flood-related information. And the Iowa DOT provides images from affected areas . Photos of Iowa City flooding .