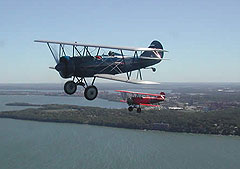 A squadron of 17 rare, antique biplanes is making two stops in Iowa this week as part of what’s being called the 2008 American Barnstormers Tour.

The biplanes are all at least 75 years old, according to pilot Clay Adams of Minneapolis. He’s been organizing the aerial parades across the country for more than ten years.

Adams says: “I’m trying to rejuvenate the interest in general aviation, get people to come out and see what it’s like to fly in these antique aircraft and visit with these pilots. They’ve got incredible stories and they have a willingness to share their aircraft and their experiences with people that come out.”

Passengers are being taken up on ten-minute thrill rides for a $50 fee. He says he’s taken up people of all ages, from little kids to World War Two veterans in their 80’s. Adams says the biplanes all date back to the barnstormer era.

He says there are no replicas on this tour — they’re all authentic aircraft dating from 1928 to 1933. Adams, who’s also a captain for a major airline, has flown more than 100 different airplanes and has more than 25,000 hours of flying experience. He says it’s something of a challenge to keep the old planes in the air.

Adams says it’s a “labor of love” to keep the biplanes flying as there’s no factory customer support like with Cessna, if something breaks. Engine parts are still being produced and are readily available, he says, but everything else for the plane needs to be made by hand, usually by the pilot.

The tour was supposed to make its first stop in Iowa City this week, but that leg was canceled due to the flooding. The biplanes are in Ames through Wednesday, and will be in Council Bluffs on Thursday and Friday.