You are here: Home / Fires/Accidents/Disasters / Cities in flood recovery look to get rid of sandbags 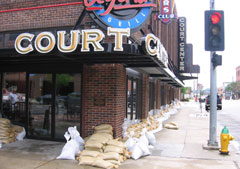 Over the past couple weeks, millions of sandbags have been put to use in Iowa to fight back flood waters. Des Moines Public Works Director Bill Stowe says the bags that went untouched by the floods can be re-used.

However, “contaminated” bags should be disposed. “If they’ve faced water, then they do need to be disposed of – but if they haven’t and folks have a need for them, they’re a lot more usable,” Stowe said. Many Iowans, who had sandbags around their homes, may wish to cut open the bags and save the sand for use on icy sidewalks or driveways in the winter.

Most cities will be collecting thousands of sandbags over the new few days. Stowe says it’s usually more cost-effective to simply destroy the bags. “Sand is a pretty plentiful commodity in Iowa,” Stowe said. “We’re fortunate to have a lot of sand. We’ve got a lot of rivers…which is the downside.”

If the bags are in good shape, Stowe says they’ll store the bags and save them for future floods. “Another option available to us, if we have an immediate need for sand for construction projects – which we do, will be to basically put them on the ground and put something like a cultivator over them to slice them open and be able to work through and re-use the sand that way and then dispose of the bags,” Stowe said.

In Des Moines, residents that have around a dozen bags are allowed to leave them curbside for pickup. Residents and businesses who have large stockpiles of sandbags are asked to return them to the site where they picked them up. Residents of other Iowa towns are encouraged to check with their local city hall on sandbag disposal procedures.