You are here: Home / Crime / Courts / State officials warn of a rash of attempts to abduct young Central Iowa girls 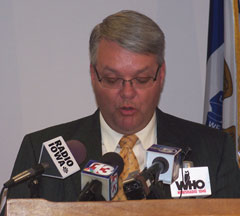 State and local law officers are asking the public to be on the lookout after at least six cases in which a man approached young girls and tried to get them into his car. Iowa Department of Public Safety spokesman, Jim Saunders, says the state got involved after noticing a link between the six cases.

Saunders says the attempted enticements in Dallas Center on June 9th and two there on June 10th, and one in Panora on the same day. Saunders says in this case an unidentified male after passing by once, approached again and offered a 12-year-old girl money if she would slap his hand. The man fled when the girl’s sister approached.

Saunders says the primary suspect at this point is a male subject with short dark hair, thin build, who was driving a newer model dark colored car. Saunders says in all but the last case in Urbandale on Tuesday, the girls were not touched by the man. The man assaulted the Urbandale girl near the Little League park before she was able to get away.

Saunders says they started comparing notes and decided the cases had enough in common to put out a statewide notice. Saunders says they’re asking parents to remind children about the dangers of speaking with strangers and asks that parents or another adult accompany children when they are playing outside. Saunders says they are also looking for help in identifying the man in these cases and any other possible cases.

Saunders says they are also asking anyone in the state who may have an instance that’s similar to this involving their children, that they contact police. Saunders says you may not have thought anything of the incident at the time, but it may be related to these cases in central Iowa. Saunders says it’s also important that parents stay alert and report anything unusual.