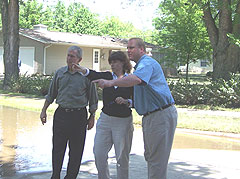 President Bush took an aerial tour of flood damage in Cedar Rapids and Iowa City Thursday afternoon, then met with local officials to discuss flood recovery plans. "You know, these are tough times for the people of Iowa City and Cedar Rapids and a lot of other communities in Iowa," Bush told a small group of reporters surrounding Bush and his entourage in Iowa City, "some of them are real tiny communities."

The president praised Iowans for the way they’ve responded to the flooding and expressed optimism the state would recover. "You know oftentimes you get dealt a hand you didn’t expect to have to play and the question is not whether you’re going to get dealt the hand, the question is how do you play it," Bush said, "and I’m confident the people of Iowa will play it really well."

Bush stood on a levee along the Iowa River, visited with evacuees at a Red Cross shelter in Iowa City and talked with volunteers who had worked to erect sandbag barriers to protect properties in Iowa City. Bush stressed the federal government is prepared to meet the needs of Iowans affected by the flooding. "I brought a lot of federal officials with me because it’s really important that as the rebuilding phase begins, there’s a coordinated effort between the federal government and the state and the local governments," Bush said.

Stung by criticism in the wake of Hurricane Katrina that his administration had been slow to react, Bush said he was confident the federal and state governments were working well together to respond to the flooding. "I want to really, again, congratulate the local folks here for really showing great compassion and working hard and hugging people and giving people hope," Bush said. "…Now, we’ve all got to come together and help people deal with the rebuilding of Iowa."

University of Iowa computer science professor Douglas Jones lives in the Iowa City neighborhood of Park View Terrace which Bush visited. He joked that locals now call it "Mosquito Flats." Jones had water in his basement and the water line reached his driveway. "It was flowing across the back yard here," Jones says. "…This exceeded the 500 year flood."

Bush shook hands and posed for pictures with Iowa City residents affected by the flooding. "You’re looking for a picture?" Bush asked as someone produced a camera. "Well, you’ll get one."

After the picture was snapped, the woman told Bush: "I voted for you."

By Thursday morning, FEMA had paid out over $11 million to individuals for housing and other assistance. The Small Business Administration had already made $3 million in loans. By midweek, over 16,000 Iowans had completed FEMA paperwork to apply for federal aid.

Click on the audio link below to listen to Bush’s remarks in Iowa City.