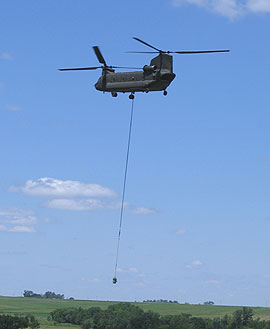 A scene reminiscent of 1993 played out in Cedar Rapids as the city moved to recover from historic flooding.

City crews disconnected the pumps and the Chinook did the heavy lifting, helping speed the process of getting the wells out and repaired and then back in action.

The scene was similar to 1993 when A Chinook helicopter was brought into Des Moines to help pull out the pumps when the city’s water treatment plant was flooded.

Cedar Rapids did not lose its water supply, but came dangerously close. One of the city’s wells was saved from flooding by a massive volunteer sandbagging effort, but residents were asked to do all they could to conserve water as the supply was very low.

The Chinook doing the work in Cedar Rapids is from Company B, 2nd Battalion, 211th General Support Aviation Battalion of the   Iowa Army Nationa Guard  based  in Mt. Joy.