You are here: Home / Agriculture / Tour of Iowa cropland to help estimate losses 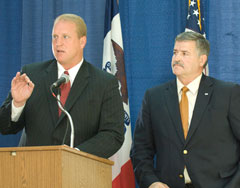 Iowa’s lieutenant governor and secretary of agriculture are leading a delegation of farm group leaders on a tour of flooded farm ground today. The goal is to eventually make an assessment of how much cropland cannot be replanted.

Lieutenant Governor Patty Judge owns farmland near Albia. "I’ve seen a flood or two before. This is not the first time I’ve seen water on the bottom," Judge says, "but truthfully, our state has never seen anything like this, even in 1993."

According to Judge, the window for replanting crops is closing rapidly. "Hundreds of thousands if not millions of acres have been and continue today to be inundated with flood water," Judge says. "…It’s a serious, serious situation. It’s one that cannot be taken lightly and it is one of which the impact is going to be felt far beyond the borders of Iowa."

Iowa Farm Bureau president Craig Lang had about 25 acres flooded on his farm near Brooklyn, Iowa.  "There is no question that all eyes are on Iowa and the Midwest as we attempt to get our arms around the extent of this devastation," Lang says.

Lang is cautious about replanting corn this late in the growing season. Lang is reluctant to plant corn after June 20, but he says other Iowa farmers will plant corn up to July 1.

Lang cites current estimates which indicate corn and soybean losses will top $3 billion. "Unfortunately this will translate into increased prices in pork, beef and milk for consumers at the grocery store in six months to a year from now," Lang says.

Governor Chet Culver also spoke this morning during a news conference at the Iowa Farm Bureau headquarters in West Des Moines, outlining the extent of the state’s flood fight. Click on the audio link below to listen to his remarks.