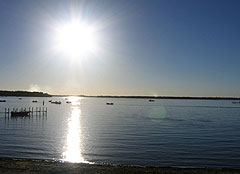 Northwest Iowa officials today announced an agreement with pork producers in the area to create an "eco-tourism" buffer zone around the Great Lakes.

There will also be no new manure plans within the buffer area. He says agreement is effective immediately. Van Orsdel says this private agreement is the result of two years of work.

He says the association initially started working with state legislators to try and protect the lakes. "We had some significant conversations, some good conversations, but it didn’t result in any legislation, so then we decided to go to the industry itself," Van Orsdel says. He says pork industry leaders agreed something could be done if they worked together.

Van Orsdel says this is the most significant agreement for the Great Lakes region in decades. "I think that as time goes on, more and more hog producers will recognize what we’ve done here and will follow along," Van Orsdel says, "I think that it is a great indication that when people sit down they can work something out and we don’t need to have laws, we can do this…in a private manner that makes it easy on everybody, and accomplishes the goals we want to accomplish. I think it’s just the beginning as it relates to the Iowa Great Lakes."

"We’re very happy, and it’s important to note that we’re not representing the entire pork industry, but we are representing numerous other pork producers who have agreed to support this agreement." Foster says the agreement shows that pork producers care about the places where they live and work.

"I think it reflects the fact that there are people in the pork industry, Christen Farms among them, that are leaders and do care greatly about environment stewardship and neighbor relations," Foster says. He says Chistensen Farms has had this attitude since its founding in the 1970’s.

Foster says the participants in the agreement represents more than half of the entire pork breeding herd represented in the nation. Foster says there are people in the pork industry that won’t like the agreement, but he says it’s a "reasonable, rationale, and right thing to do for our industry and the Great Lakes Region."