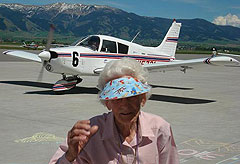 Mason City is the only Iowa stop in this week’s airplane race that features female pilots flying cross-country from Montana to Massachusetts.

The Air Race Classic is the only all-women transcontinental air race, according to pilot and participant Terry Carbonell of Florida.

She says the event dates back to the 1929 Powder Puff Derby. This year, women from as far away as New Zealand have come to participate in the event. Carbonell says 36 airplanes are in the race this year, with all of them stopping at the Mason City Municipal Airport between now and early Thursday.

She says it’s a real race, but each plane is given a handicapped speed since each aircraft is manufactured differently. Carbonell says the race will make several stops between the starting point and the end on Friday night on the East Coast. Participants left Tuesday from Bozeman, Montana, and are headed for Mansfield, Massachusetts.

She says all planes are required to be in Mansfield by 5 o’clock Friday night. The original Powder Puff Derby was given its name by humorist Will Rogers. In that first race in 1929, famed aviatrix Amelia Earhart placed third. For more information about this year’s event, visit the Air Race Classic website .