You are here: Home / Fires/Accidents/Disasters / Half of flooded Cedar Rapids homes may have to be demolished 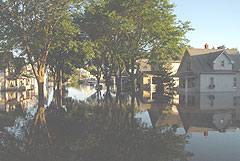 Housing inspectors in Cedar Rapids say around 2,000 flood damaged homes may need demolished. City inspector Mike Feuerbach says that represents roughly half of the homes impacted by the flood. The number of homes in line for demolition could grow. Feuerbach says inspectors are finding more problems when they visit a home for the second time.

"You may find that foundations do actually cave in days after the flood waters have receded from the basement and went back down through the flood drains," Feuerbach said. Chuck Woodward had Feuerbach inspect his home for a second time on Tuesday. He’s been cleaning his home, although he has not been cleared to live there yet.

"It gets depressing after a while," Woodward said. "I don’t spend 20 hours here working on it everyday. That would be too much, you’d be too tired, too worn out." Woodward’s home has deteriorated, with more cracks in the foundation. He says he’s not sure if it’s worth cleaning up since the home might not be a safe place to live.

Flood victims in other cities are waiting to hear if their homes will qualify for a government buyout program. City officials in Mason City say they’ve identified 132 homes that may qualify to be bought out.

The full extent of the flood damage to Iowa’s public libraries won’t be known for some time according to the president of the group that represents those institutions. Barbara Peterson, director of the Council Bluffs Public Library, is the current president of the Iowa Library Association.

"People just have not had the time, first sandbagging and then later dealing with the damage that, you know, that I don’t think we know the extent of everything yet particularly in libraries and museums and those sorts of places," Peterson says.

The Cedar Rapids Public Library was inundated with water. The New Hartford Public Library was damaged by the May 25th tornado, then hit again two weeks later by flood waters. Three libraries on the University of Iowa campus — the main library, the music library and the art library — took on water when the Iowa River escaped its banks.

"A lot of what you have in libraries, some of it’s replaceable, but if you have older, archived material that’s damaged — it’s not," Peterson says. Cedar Rapids Public Library employees not only moved items to upper floods in the building, but they moved some of the collection and equipment to the nearby Marion Public Library. Peterson says the Coralville Public Library is trying to help fill some of the gap, too.

"I know that neighboring libraries are really rallying, trying to meet the needs of Cedar Rapids," Peterson says. According to the State Library of Iowa, libraries in seven other cities suffered mild to fairly serious water damage. The list includes libraries in Chelsea, Creston, Elkader, Iowa Falls, Rockford, St. Charles and Waterloo.

A number of Iowa museums have libraries or archives used by researchers and some, like the Czech and Slovak Museum in Cedar Rapids, sustained major damage. The Dan Gable International Wrestling Institute and Museum in Waterloo was inundated by the flood and a huge mural depicting Abraham Lincoln wrestling in 1832 was damaged, but museum officials hope it can be restored.