You are here: Home / Fires/Accidents/Disasters / Public libraries struggle to recover from floods 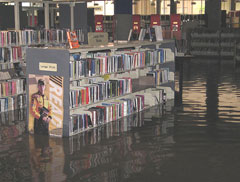 The full extent of the flood damage to Iowa’s public libraries won’t be known for some time according to the president of the group that represents those institutions.

"People just have not had the time, first sandbagging and then later dealing with the damage that, you know, I don’t think we know the extent of everything yet particularly in libraries and museums and those sorts of places," says Iowa Library Association president Barbara Peterson, who is director of the Council Bluffs Public Library.

The Cedar Rapids Public Library was inundated with water. The New Hartford Public Library was damaged by the May 25th tornado, then hit again two weeks later by flood waters. Three libraries on the University of Iowa campus — the main library, the music library and the art library — took on water when the Iowa River escaped its banks.  "A lot of what you have in libraries, some of it’s replaceable, but if you have older, archived material that’s damaged — it’s not," Peterson says.

A number of Iowa museums have libraries or archives used by researchers and some, like the Czech and Slovak Museum in Cedar Rapids, sustained major damage. The Dan Gable International Wrestling Institute and Museum in Waterloo was inundated by the flood and a huge mural depicting Abraham Lincoln wrestling in 1832 was damaged, but museum officials hope it can be restored.