You are here: Home / Business / Vilsack may lead lawsuit over smoking ban 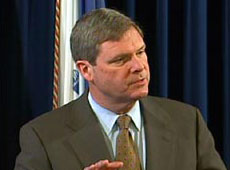 Former Iowa Governor Tom Vilsack may be the lead lawyer in a lawsuit against the state, challenging Iowa’s smoking ban, which goes into effect tomorrow.

The core of the case would revolve around the exemption which allows smoking on the gambling floors of the state-licensed casinos in Iowa.

A group of bar owners met with Vilsack to talk about a lawsuit. "Now I have not been, at this point, formally hired, but I have been contacted and I’ve advised folks who are interested in using my services that it would be under those circumstances and I think that there are a number of folks — bar owners and non-bar owners — who are interested in making sure that the playing field’s level," Vilsack said.

A bill to ban smoking in most public places — with the exception for the gambling floors in Iowa casinos — emerged this spring from the legislature and was signed into law by Governor Chet Culver this past April.  "I’ve done some research and I believe that there is a good legal argument to be made that the smoking ban did not go far enough and needs to be extended to some of those other places where there are workers and customers who would potentially be exposed to secondhand smoke, which is the intent of the law," Vilsack said.

There’s another legal argument to make, according to Vilsack, one that has great appeal to the bar owners with whom he’s met.  "From an economic standpoint, those who are in the entertainment venue business, as certainly bars and taverns are, they ought to be on an equal and level playing field and no one should be given a privilege or an immunity from a law simply because they have political connections or political might that resulted in exceptions being created that make them outside the law," Vilsack said.

The former governor said it’s a matter of "fundamental fairness to those who go to casinos, those who work in casinos and those who are competing for limited entertainment dollars."

Vilsack served two terms as governor before launching a bid for the White House in 2007.  In early 2008, he dropped out of the race.  Last summer, Vilsack joined the law firm in which former Vice President Walter Mondale is a principal partner.