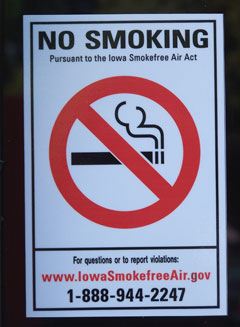 "Hundreds" of Iowa bar owners have joined together and filed a lawsuit that seeks to get rid of the state’s new law which bans smoking in most public places.

Brian Froehlich of the Iowa Bar Owners Coalition says his group has joined with the Clinton Bar and Restaurant Association to try to get rid of the new law. "Is this going to be a hard fight? Yes it is," Froehlich says.

The paperwork for the lawsuit was filed yesterday, according to Froehlich,and their initial hope is that a judge might suspend the law until bar owners get their day in court. "We’re trying to see if we might be able to get a judge to give us an injunction ’til we can get this thing fixed," Froehlich says. "The law is bad."

The bar owners hired former state Representative George Eichhorn of Stratford as their lawyer. They chose Eichhorn, who is a Republican, over former Governor Tom Vilsack, a Democrat, who met with the bar owners and laid out his ideas for the case.

"We talked to several lawyears around the state and it came down to it that we felt George best represented what our thoughts and feelings were over Goernor Vilsack’s proposed idea, which all he wanted to do was go and make the law stronger," Froehlich says, "so that’s why we steered away from Vilsack on this." During an interview with Radio Iowa, Vilsack said he told the bar owners he would present a case that primarily sought to get rid of the exemption which allows smoking on the casino gaming floors, as that was an unfair advantage over other "entertainment venues" like Iowa bars and restaurants which are now non-smoking zones.

According to Froehlich, there are now "hundreds" of bar owners from all across the state who are helping to finance the lawsuit. "We’re picking up more support every day," Froehlich says.