You are here: Home / Outdoors / Bear shot in Fremont County 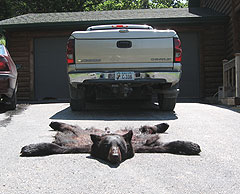 A conservation officer in southwest Iowa’s Fremont County found an unwelcome guest outside his home last week, a wild bear.

Marlowe Wilson says he first spotted the animal last Thursday night. It was digging through his trash near his home located four miles south of Sidney.

"I was about ready to go to bed and I was walking by the patio door and looked out and saw (the bear) about 20 to 30 feet away from the house," Wilson said. "He had taken the trash can off the edge of the deck and was eating the trash."

When Wilson grabbed a camera out of his truck and began taking pictures, the bear made an aggressive move but did not attack. Wilson says he grew increasingly concerned for the safety of his family and dogs when the bear returned to the area three times. He eventually shot and killed the animal with a high powered hunting rifle.

Wilson believes the bear, which weighed 200 pounds, had been living in the wild all of its life and was not held in captivity. "He had a full set of healthy teeth and all his claws," Wilson said. "Generally, if they’re in captivity, their teeth are kind of beat up because they’re obviously in some sort of fortified cage and they’re chewing on the wire or containment. This bear showed no indication of that and he showed no indication of being tagged…so from all indications, he was wild." 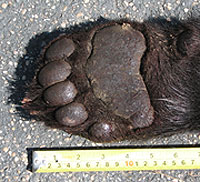 Wilson says a bear was spotted two or three days earlier in the Westboro, Missouri area, but he could not confirm if it was the same animal he shot. He says residents in the area should not be afraid other bears are roaming around.

"I liken it to winning the lottery, although I would have rather won the lottery," Wilson said. "It’s basically a freak happening. I never expect to see it again in my lifetime quite honestly. It’s just one of those odd happenings that happened I guess."

The animal’s entrails were saved for wildlife research experts to examine and a tooth will be examined to determine its exact age. The Iowa DNR says it’s the fifth confirmed black bear sighting in Iowa in 2008. Another black bear was shot by a citizen in Franklin County last week.