You are here: Home / Military / Iowa veterans give new cemetery stamp of approval 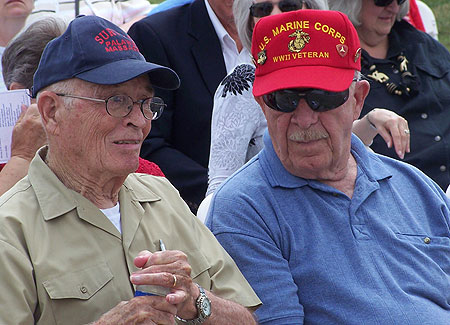 Many Iowa veterans gathered near Winterset Thursday for the dedication of the new Iowa Veterans Cemetery.

Several World War Two veterans talked about their service and gave a critique of the new cemetery. Glenn McDole of Ankeny served with the U.S. Marines.

McDole was captured off of Corrigedor and Bataan, and was a prisoner for just under three years before he escaped. McDole says while everyone else was annihilated in the prison camp, he got away by swimming seven miles. He was picked up by some Phillipinos, "And God bless ’em they took the best of care of me, and in the first part of ’45, I got picked up by a P-B-Y patrol bomber."

McDole is impressed with the new cemetery. McDole calls it "wonderful" and "unbelievable," and something that’s been needed for a long time. The cemetery sits upon a hill off the interstate, and while all the grass hasn’t fully filled in, McDole says the setting is perfect. "This is, this is ideal. It’s a beautiful place, just can’t be any better," McDole says.

Bill McNamara of Des Moines was also in the Marines in World War Two. McNamara says he was only 17-years-old and made one of the last two landings on Iwo Jima. He says after Iwo Jima, he spent 16 months in the Panama Canal zone. McNamara says he is considering being buried in the new cemetery.

McNamara says he and his wife have a couple of plots in Des Moines, but are going to discuss selling them so they could be buried in the veterans cemetery. "Because it is beautiful out here," McNamara says.

Roy Picht of Ames served in England. Picht was in the Eight Air Force for a year and a half in England with the 458th bomb group as the ground crew chief for B-24’s. Picht is impressed with the new cemetery.

Picht says it’s a beautiful place, "Looks like it’s going to be a very nice place for veterans to rest." The director of the cemetery says there are some 70 remains waiting to be interred in the cemetery and that process will start Monday.