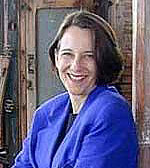 A best-selling murder-mystery writer is making her first-ever book-signing stop in Iowa today. "Where Memories Lie" is Deborah Crombie’s 12th novel in the series about a Scotland Yard detective in London. Crombie is a Texas native and admits she can’t explain why, since she was a girl, she’s always been fascinated by all things British.

"I don’t know, actually. It’s one of those very, very just odd life things. I’ve loved everything English from as long as I can remember," Crombie says. "I didn’t go to England for the first time until I was 25 and I got off the plane at Gatwick Airport and on the bus into London, just had tears pouring down my face because I felt this enormous sense of homecoming and identification and it has never gone away."

She credits part of the wide-spread popularity of her books to her dedication to authenticity and she makes two or three trips to England each year, sometimes for a month at a time, researching fine details for her stories. Crombie says she loves her home state of Texas, where she still lives, but can’t get enough of the U-K.

"I don’t know if it’s a blessing or a curse. Most of the time I think it’s a blessing," she says, laughing. "There are a lot of times I think it would be easier to write something close to home where if you weren’t sure about exactly what was next to the dry cleaners or which direction the street ran, you could go and look without having to cross the Atlantic Ocean."

Crombie got her college degree in biology and had worked selling concessions to movie theatres for much of her professional life before taking a stab at becoming a crime novelist. "I didn’t write for years because I had taken some creative writing classes where they drum into you that you can only write what you know," Crombie says. "I grew up in a northern Dallas suburb and I had no interest in writing about what I knew and so it kept me from writing at all and one day I decided, well, why not?"

Now, her books have been published in a dozen countries in multiple languages, including French, German, Japanese, Italian, Czech and Norwegian. Her fifth novel, "Dreaming of the Bones," was the New York Times Book of the Year and was named one of the 100 Best Crime Novels of the 20th Century. Crombie appears tonight at 7 o’clock at Prairie Lights Books in Iowa City, and Tuesday night at The Bookworm in Omaha.