You are here: Home / Health / Medicine / New campaign launched to try and improve the healthcare system 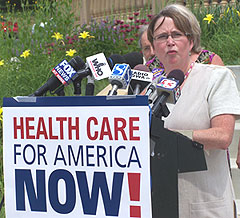 Organizers of a campaign to improve the country’s healthcare system kicked off their effort today on the steps of the state capitol building.

Ahrens says they’re organizing to ensure that the first order of business for the next president and next congress is pass legislation in 2009 to provide “quality, guaranteed healthcare for all.”

Ahrens says in a few short weeks, 18 organizations have joined the movement, and she says it’s growing daily. America’s healthcare system has been the target of those seeking to change it for many years — but Ahrens says this time around will be different.

Ahrens says there are nearly 100 organizations represented across the country that are demanding “that the needs of the American people are put before profits and greed.” She says those organizations will use their combined political power and grassroots organizing capacity to take on the insurance industry and others aligned against healthcare reform. Ahrens says part of their effort will be a media campaign.

Ahrens says the organizations in Iowa and nationally though will focus on a grassroots campaign to mobilize the American public and educate people to put pressure on the next president and congress.

Ahrens says the campaign will spend 1.5 million dollars on its initial national a national advertising campaign, with plans to spend 25 million over the next five months. Some of the groups involved in the effort are AFSCME, ACORN, Americans United for Change, MoveOn, SEIU, Planned Parenthood.