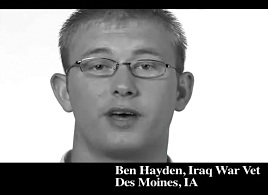 A group called "Vets for Freedom" is running TV ads in Iowa and 11 other states, trying to shift public opinion of the war in Iraq. As you flip through the cable TV channels in Iowa, you may for a few seconds see the face of 23-year-old Ben Hayden of Coralville — one of the Iraq war vets featured in the ad.

Hayden is a former Marine who served two tours-of-duty in Iraq. "When I got out of the Marine Corps in June of last year, I came back and I saw that a lot of people…were misinformed on the war in Iraq. They thought that we were losing, that it was a lost cause and just, we need to forget it, pull our troops home — we’re not doing any good over there," Hayden says. "I had just left there. I knew that was wrong."

Hayden and the other soldiers in the ad say the U.S. should remain in Iraq until victory is achieved; they oppose any timetable for troop withdrawal. "I decided to join ‘Vets for Freedom’ because everything I did, all the lives that were lost, all the hard work — that can’t be for nothing," Hayden says.

While Hayden says the ad campaign isn’t aimed at influencing the outcome of the presidential election in Republican John McCain’s favor, the ad does turn Democrat Barack Obama’s campaign slogan on its ear. "We changed strategy in Iraq and the surge worked," two soldiers say in the ad, followed by a third who says, "now that’s change we can believe in."

Hayden says the group wants to change the minds of Americans and that includes Americans who may be running for president. "Some of what we’ve said has kind of been taken out of context. We’re not a political organization. We’re more of an issue advocacy group," Hayden says. "We’re looking to educate the American people on the importance of success in Iraq."

Hayden also blames the media for not broadcasting stories of successes in Iraq, making the ad campaign necessary. "We’re seeing successes every day — leaps and bounds — and nobody was reporting it and so I felt that the soldiers, sailors and marines had to have a voice back here, back on the homefront," Hayden says.

Hayden’s hometown was Ankeny. He’s attending Kirkwood Community College right now after a four-year career as a marine and serving as "captain" of the Vets for Freedom initiative in Iowa.  Hayden currently lives in Coralville. The ad mistakenly lists his home as Des Moines.