You are here: Home / Agriculture / Audubon’s "Albert the Bull" to get a facelift 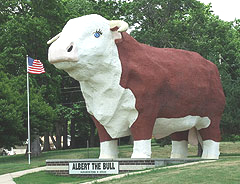 A giant statue, erected 45 years ago as a salute to Iowa’s beef industry, has received a major facelift.

Albert the Bull , a 30 foot tall, 45 ton concrete structure, has been welcoming visitors to the western Iowa town of Audubon since 1963.

The blue eyed Hereford was named after local banker Albert Kruse, who organized Operation T-Bone Days, an annual event honoring the days when local cattle were shipped to Chicago stockyards.

Tom Nielsen, executive director of Audubon County Economic Development, says Albert has become a huge tourist attraction. "We don’t have a real good way of counting the number of visitors, but it certainly has to be in the thousands per year," Nielsen said. "During the summer months, daily, there’s just constantly people driving into Audubon and taking pictures of Albert."

When the idea for the monster bull was pitched by local Jaycees in the early 60s, Nielsen says they had no way of knowing exactly what it would come to mean to residents of the area. "You know, you’d be hopeful that it would create local attraction, but it has just grown…and (Albert’s) a real neat, unique character," Nielsen said. "He speaks well for the industry, our town and this part of the state of Iowa."

Last week, workers completed a nearly $7,000 makeover on Albert that included plaster repairs and a new paint job. The original construction cost roughly $30,000 and was financed through fundraisers and donations.

Nielsen says, in order to keep costs down, abandoned Iowa windmills were used in the steelwork that form Albert’s internal frame. A kiosk near Albert’s platform in a city park claims the concrete animal is nine times larger than an actual Hereford and is "authentic right down to his toenails."