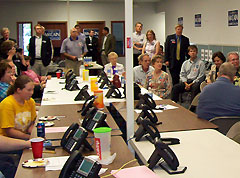 About 75 people gathered in an office suite at a suburban strip mall tonight to mark the opening of Republican presidential candidate John McCain’s general election headquarters in Iowa.

Dave Roederer, state chairman for the McCain campaign, opened a brief program with a quip aimed at Democratic presidential candidate Barack Obama. "You may recall that in the primary season that Mr. Obama talked about being the candidate of change," Roederer said, pausing for effect, then adding: "What we didn’t know that what he really meant is he was going to be changing his position every other day on every issue that comes up."

The closer was former Iowa Governor Terry Branstad, who on three occasions called Obama naive. Branstad compared Obama with European leaders, prior to World War II.  "They said, ‘Well, if we just give Hitler the Sudatenland, he’ll be satisfied’ — but that didn’t do it," Branstad said, "and I think if we look at the rhetoric coming out of Iran, to think naively that we can just negotiate with them when we’ve got a country whose leader says that we want to wipe Israel off the face of the earth…we know that we need to have a leader that has the courage of a John McCain."

Gentry Collins, the 2008 Iowa Caucus Campaign manager for Mitt Romney, is now Midwest Regional Campaign Manager for the McCain campaign. He makes no apologies for tonight’s low-key affair.  "Our people are sort of settled into the summer and settled, frankly, into the work of organizing in key swing states. And so, you know, have we focused on building huge events? No, we haven’t," Collins said. "We’ve focused on trying to do the work that we need to do and that work is getting done."

A few folks got about the work of calling Iowans and urging them to vote for McCain. The "Voice Over Internet Protocol" phones feature a small screen with text for callers to read as well as the ability to type in information about their interaction with voters. "They consolidate all of our reporting so as a campaign we can understand immediately how many calls have been made, whose been talked to, what kind of response we’ve gotten," Collins says. "It limits our cost because it doesn’t operate over a traditional long-distance line…so they’re fantastic for a campaign."

You may listen to last night’s 20-minute-long program at McCain campaign headquarters by clicking on the audio link below.

Obama’s campaign announced earlier today plans to open 15 offices around the state of Iowa on Saturday.