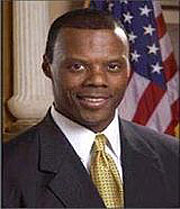 Former Congressman J.C. Watts, the first black politician to be elected to Congress from Oklahoma, says it’s time for a discussion among African Americans about fatherhood and getting kids to stay in school.

In a conversaton caught by a live microphone earlier this week, Jesse Jackson criticized Democratic presidential candidate Barack Obama for “talking down to black people.” Watts, a Republican, says he’s been criticized for making the same points Obama’s been making.

“If you go back and look at my 15 year, 20 year public service career, I’ve been saying those things for 20 years,” Watts says. “…There is a discussion or a debate or a dialogue — whatever you want to call it — that I think needs to be had in the African American community and in the faith community as well.”

While Watts in the past has accused some black politicians of being “race-hustling poverty pimps,” Watts isn’t rebuking Jesse Jackson for his recent comments. Watts, who is 50, says he’s old enough to remember the changes brought about by the civil rights movement in which Jackson played a role. “I remember the day I couldn’t swim in the public swimming pool. I had to sit in the balcony of the movie theater. I couldn’t sit down below. I remember the day that, you know, three of my white friends quit the football team when they moved me to quarterback because they said they didn’t feel right playing behind a black quarterback, so I remember those days,” Watts said. “I’m old enough to remember that, but Kay I’m also young enough to understand that we are in an information, technology age and that education, while it’s always been important, is ten times more important or critical today.”

Watts, who left congress in 2003, says he has no interest in returning to elective office, and no wish to be Republican presidential candidate John McCain’s running mate. “As a matter of fact, I told my wife that all 202 calls that pop up on the caller ID, let it go into voice mail,” Watts says. “Don’t take the call.” The 202 area code emcompasses Washington, D.C.

Watts is in Iowa today on behalf of the “Ed in ’08” campaign to call attention to education issues. Watts says teachers should be paid more and national standards should assess whether schools are doing the job of teaching students. “If you don’t have standards, if you’re not keeping score — it’s just practice,” Watts says.

Watts led the Oklahoma Sooners to back-to-back Big Eight titles in 1980 and ’81, then he played professional football in Canada for five years before returning to Oklahoma to work as a Baptist pastor.  He was elected to congress in 1990.