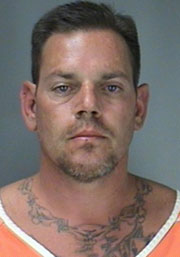 Des Moines police have arrested a local man and charged him with two counts of first-degree murder in the deaths of two people Thursday. Police were call to an apartment around 11 a.m. on the report of a dead person.

Police say 52-year-old Stanley Brandon Long was found unresponsive in his apartment by his son’s girlfriend, who had come to check up on him. The Polk County Medical Examiner says Long died as a result of stab wounds

About four hours later, Des Moines Police received a 9-1-1 call from a man who said he found a bloody woman in an apartment several blocks away. Officers arrived and found the dead woman identified as 50-year-old Charlene Gorden. The Polk County Medical Examiner says Gordon died from stab wounds.

Police today arrested 42-year-old Richard Robert Mutchler and charged him with the murders of Gorden and Long. The charges are in addition to charges of first-degree robbery and willful injury as a result of a carjacking that occurred Thursday evening.

Police say 47-year-old Samuel Heard was robbed of his truck and beaten with a tire iron by Mutchler. Heard was taken to a Des Moines hospital where he received treatment and was released.