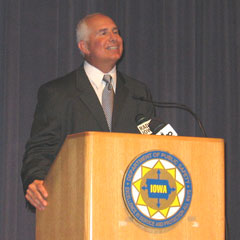 Two of the key agencies within the Iowa Department of Public Safety will soon be under new leadership.

The Assistant Director of the Iowa Department of Criminal Investigation, John Quinn, has been promoted to D.C.I. Director.

D.P.S. Executive Officer Kevin Frampton is taking over as Director of the Department of Narcotics Enforcement.

Quinn and Frampton were both sworn-in to their new positions today, but will not assume the duties until June 27. Quinn says his biggest challenge will be learning the "ins and outs" of all D.C.I. services, aside from the high-profile criminal investigations.

"There’s so much more to the D.C.I. with regards to our support operations and also with regards to our gaming industry…keeping the integrity of gaming safe and keeping the public safe when they attend venues like that," Quinn said. For the past 15 years, Quinn has helped train law enforcement officers statewide on the techniques of interviewing and interrogation.

Quinn says interrogation procedures are constantly changing primarily because of what the courts say law officers can and can not do in those situations. Quinn will replace Steve Bogle, who will transfer to Executive Officer of the D.P.S. Quinn is a former starting quarterback and was a captain on the Iowa State University football team in the early 1980’s.

Frampton, meanwhile, will succeed retiring D.N.E. Director Ken Carter. Frampton has spent time as a Trooper with the Iowa State Patrol and says that background will serve him well in his new job. He says the D.N.E. and State Patrol work together to fight the trafficking of narcotics on Iowa highways. Frampton is asking Iowans to work with law enforcement in the state to track illegal drug activity.

"The average citizen, I don’t think, realizes the seriousness of the drug problem or how (bad) it could be," Frampton said. "If they see suspicious activity, they should report it to the local authorities." Frampton says the focus of fighting drugs in Iowa primarily revolves around what’s happening outside the state’s borders.

"The biggest problem right now is the tremendous amount of illegal drugs coming into the state from the southwest part of the country or Canada," Frampton said. "So we’re trying to get control over dismantling the large drug trafficking organizations that are moving narcotics into Iowa."

Jim Saunders, who has served as a spokesperson for the Iowa Department of Public Safety, has been promoted to Assistant Director of the D.C.I. He’ll fill the position left vacant by the retirement of Steve Conlon. Both Conlon and Ken Carter are retiring after 33 years in law enforcement in the state of Iowa.