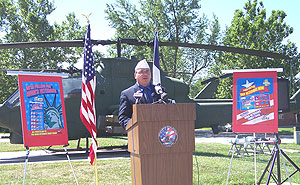 The Iowa Lottery unveiled a $1 scratch ticket today that’ll help fund a variety of services for veterans from the state.

State Representative McKinley Bailey, a Democrat from Webster City, is an Army veteran who sponsored the legislation.

Bailey says since he left the military he’s seen the gaps in the federal system that cares for veterans who leave the service, and says he recognized that you can’t count on the federal government to fix all the gaps.  Bailey says the Iowa Veterans Fund was a good idea, but says getting the money to hit the fund’s 50-million dollar goal has not been easy.

He says funding had been hit and miss for several years since its inception, and they wanted to find a way to ensure some funding every single year regardless of the political climate and budget concerns. John Derner is the is the adjutant of the American Legion Department of Iowa.

Derner says they will continue to ask the Iowa Legislature to make an appropriation to the fund until it reaches the established level. Some of the items the Iowa Veterans Fund provides are travel money to medical care, job training or college assistance funds, benefits for children of a disabled veteran.

Derner says,"Our veterans and their families serve our country selflessly, serve our state selflessly, and this is a great chance for Iowans to not only say ‘thank-you’ and bring some recognition for what they do, but also to make a contribution to help them when they are in need of assistance." Iowa Lottery spokeswoman, Mary Neubauer, says the scratch ticket is called "Stars and Stripes," and features a red, white and blue theme. The ticket was unveiled in front of the Gold Star Museum at Camp Dodge in Johnston.

Neubauer says a one-dollar pull-tab game with profits dedicated to the veterans fund will go on sale next Monday is called "All American." The pull-tab features several patriotic symbols, including the Liberty Bell and Statue of Liberty. Neubauer says they will introduce new games each year dedicated to the trust fund.