You are here: Home / Olympians Johnson and Jones get sendoff in Des Moines 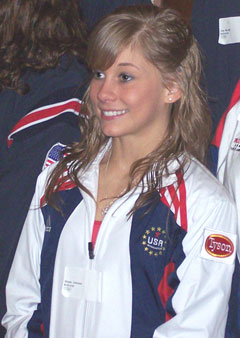 Two of the Iowans who will compete for the United States at the summer Olympics in Beijing were treated to a sendoff in downtown Des Moines this afternoon. Gymnast Shawn Johnson from West Des Moines is the reigning U.S. and world champion.

“I’ve always dreamed of being in the Olympics, but, you never think it will be a reality, and when I was finally named to the team and knew that my county had picked me to represent them in the biggest meet in the world, it gave me goosebumps, Johnson said, “it’s the greatest feeling in the world.”

Johnson is considered a favorite for gold but says her main goal was to just make the squad. She says now that she is on the team she wants to go there and it her best. “If I come back with the gold, it will be just, even better,” Johnson says.

Johnson says she does not feel any pressure as she gets ready for the Olympics. “I live to compete, I love the competition, I love the adrenaline, I love the pressure,” Johnson explains, “that’s why I practice four hours a day, every day. I mean, we work for those competitions and I love going out there and showing the audience what we can do, and just have fun.”

Former Des moines Roosevelt standout Lolo Jones will run the 100 meter hurdles after winning that event at the U.S. Olympic Trials. “I’m representing not only the United States, I’m representing Iowa, and also, for every kid out there, I just want you to know, don’t give up on your dreams,” Jones says.

Persistence has paid off for Jones, who failed to make the U.S. squad four years ago. Jones says she always placed, third, fifth and never made it. But Jones says you can’t give up, if you want something you have to go for it.

Jones says four years ago she cried when she didn’t make the team and says you can achieve great success if you don’t give up on your dream. The Olympics begin August 6th.