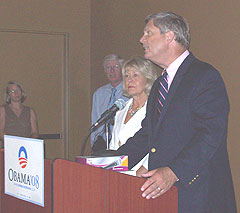 About 200 Democrats from Iowa’s largest country crowded into a room tonight to get a pep talk from former Iowa Governor Tom Vilsack.

Vilsack said he would not have been elected governor in 1998 and again in 2002 if he hadn’t won Polk County by wide margins.

Vilsack suggested Barack Obama’s fate rests in the performance of voters in Polk County, too.

"Folks, Iowa is critical to this election," Vilsack said. "The next president of the United States will be the person who wins Iowa and for us to win Iowa, Polk County can’t just a 10,000 vote margin. It has to be double that. It has to be triple that." The crowd applauded.

Vilsack cited the stats from the 2000 election in Iowa. "Al Gore won Polk County by 10,000 votes. Now, that seems a wide margin. He lost Sioux County by 10,000 votes which is why it was so difficult for (Gore) to win this state," Vilsack said, "and in 2004 we did an enormous effort to get as many Democrats as possible to the polls, but the other side did a slightly better job and we lost Iowa."

As you may recall, Vilsack ran for president himself, dropped out of the race in February of 2007 and endorsed Hillary Clinton about a month later. Vilsack endorsed Obama last month and has been making speeches and public appearances on Obama’s behalf in the past month.

Last night, Vilsack’s target audience was a group of Democrats who had supported candidates other than Obama in the Caucuses. "I’m prepared to do my part," Vilsack said in conclusion. "Are you prepared to do yours?"

Vilsack’s wife, Christie, was an active Iowa backer of Hillary Clinton. She stood by her husband’s side, but did not speak to the crowd. Mrs. Vilsack is a delegate to the Democratic National Convention and during an interview with Radio Iowa tonight, Mrs. Vilsack said she’ll cast her vote at the convention for Barack Obama. "We’re all in this together," she said. "One person gets to carry the flag in the end and we’re all going to be marching right behind him."

The Democratic National Convention will be held in Denver in late August.