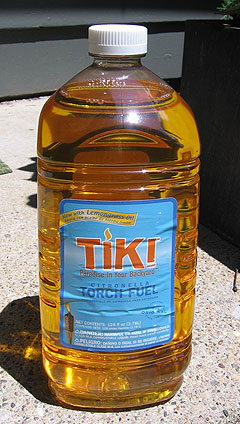 At least five Iowans got sick in recent weeks after accidentally drinking fuel for those backyard bamboo tiki torches.

Another case this month in New Jersey killed an 84-year-old woman who drank the fuel, thinking it was juice.

Noble says, “We’ve had exposures with children and the kids, obviously, cannot read the label so they think it looks like apple juice and they’ll take a sip of it, not even paying attention to the smell.” She says it may just take a taste of the fuel for it to slip into the lungs and cause choking, coughing, difficulty breathing and possibly pneumonia.

Noble says parents need to educate the entire family on the dangers of these “look-alikes” as preventing such accidental poisonings is vital. “Try to keep these in the original container. Don’t put it in a pop bottle and try to transfer it into the tiki torch that way because other people might come along and see it in the glass or the pop bottle and think it’s something other than the torch fuel,” Noble says.

The tiki torch fuel contains a hydrocarbon, which is similar to lamp oil and gasoline, which Noble says can be fatal. “Make sure these types of products are kept in a locked cabinet, not accessible to children, but also making sure we don’t keep these in the same areas we keep food products, so don’t have these sitting on the kitchen counter. That’s just waiting for a mistake to happen,” Noble says.